The recent British heatwave has created a surge in demand for solar PV installations, according to this recent report. On a good day we are able to meet about 2% of the UK’s energy demand with solar power. Doesn’t sound too bad, until you realise that Germany are churning out a meaty 5%, and have big plans to generate 20% of their electricity from renewable sources by 2020.

The in-depth article below is used with permission from The Carbon Brief. You can read the original version here.

Germany’s energy transformation, or Energiewende, has become a national obsession. If it succeeds, Germany’s model could become a blueprint for other industrialised nations seeking to decarbonise their economies.

In 2010, the German government set ambitious targets as part of its Energiewende programme: to reduce emissions by 80 per cent and provide for 80 per cent of the country’s electricity consumption from renewable sources by 2050. The government’s decision to phase out nuclear generation by 2022 has complicated matters, putting renewables at the centre of the energy revolution.

Germany has long supported renewable generation and the energy sector is starting to see the effects – and challenges – such commitments bring. Booming solar, curtailing coal, and upgrading the country’s transmission grid are all part of the Energiewende story.

More of the same: Germany ramps up renewables

The Energiewende’s targets mean Germany must significantly ramp up the the amount of renewable power connected to the grid. But this isn’t a completely new ambition.

The German government invested heavily in renewables research and development in the 1980s, and the Electricity Feed-in Act (Stromeinspeise-Gesetz) established a support mechanism known as feed-in tariffs for renewable energy in 1991. The 2000 Renewable Energy Act (EEG) reformed the subsidies, and a 2004 amendment to the EEG set a target for renewables to provide at least 20 per cent of electricity production by 2020. 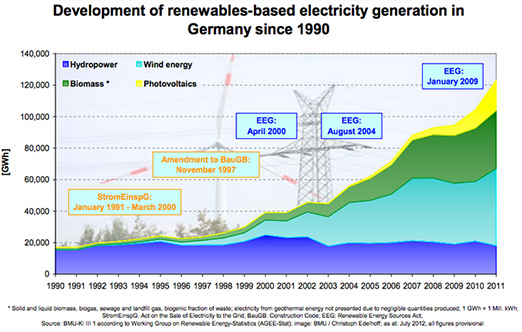 Technological advances mean the cost of solar installations has reduced by over 50 per cent in the last five years. The cheapness of solar technology and the feed-in tariff payments make it an attractive option for households and private investors. The rapid increase in solar installations meant solar power produced 27.6 terawatt hours of electricity in 2012, a 47 per cent rise on 2011. But that’s still only about 5 per cent of Germany’s total electricity generation.

And solar’s popularity isn’t all good news for Germany. Many of the installations use cheap, panels imported from China – leading to job cuts at German solar panel manufacturers. In May, the European Commission proposed a tax on Chinese solar panel imports to revive the European market. But the German government opposed the tax out of fear the Chinese would block German solar goods in retaliation.

Wind power has also grown significantly, with an additional 6,000 megawatts of new capacity installed since 2010, according European Wind Energy Association data. It shows Germany has the most installed wind capacity of any country in Europe, with over 31,308 megawatts installed – almost 10,000 megawatts more than second-placed Spain.

The International Energy Agency (IEA) expects renewable energy to be the main source of electricity generation in Germany by 2030, with wind providing around 30 per cent, solar around eight per cent and hydro about five per cent.

There are concerns that fossil fuels would predominantly fill the gap left by the nuclear power phase out. In 2011, nuclear provided about 18 per cent of Germany’s electricity generation, with that proportion declining as more generators are decommissioned.

But extra renewable generation has so far gone some way to fill the gap left by nuclear. In 2012, almost a quarter of Germany’s electricity was generated from renewable sources – up from about 20 per cent in 2011 – and this is expected to rise as the Energiewende’s policies encourage the industry to develop.

So Germany’s commitment to a non-nuclear, low carbon energy sector – refreshed by the Energiewende targets – is delivering increasing amounts of renewable generation.

A common criticism of Germany’s decision to phase out nuclear power is that it has led to burning more coal. And there has indeed been a small jump in coal power generation since the nuclear phase out was announced in 2011, causing emissions to rise.

But phasing out nuclear is only part of the coal revival the story, the economic competitiveness of gas is plays a large part.

One reason coal is currently such a significant part of Germany’s energy system is that gas remains relatively expensive on the international market, partially due to an increased amount of cheap US coal exports. The collapse in the EU’s carbon price also means there is little incentive to move away from high-emitting coal. This effect isn’t restricted to Germany – the UK has also seen coal generation increase recently.

Germany also makes money from exporting coal. The country doubled its power exports from coal plants in the second quarter of 2012. There is a strong market for exporting the power to neighbouring countries such as the Netherlands, where it provides a cheaper alternative to gas.

And Germany is building more coal plants, though probably not as many as some suggest.

Bloomberg reported in February that about 5,300 megawatts of new coal plant capacity would start generating in 2013, and German news agency DW reports that as many as 23 new coal plants could eventually be built.

It’s unclear how many of the plants will actually end up being constructed due to regulatory and policy obstacles, however. A new report by energy consultancy Poyry suggests short-term economic opportunism drove Germany’s recent coal developments, with a bleaker long term outlook. Poyry doesn’t expect more than the eight gigawatts of coal plants currently under construction to be completed.

The shift to coal has affected Germany’s emissions. According to Bloomberg, the increase in coal generation was largely responsible for a 1.6 per cent rise in greenhouse gas emissions in 2012, bucking a long-term decline. But the president of the Germany’s environment agency said further expansion of renewable energy sources checked the rise.

The government expects this to be increasingly the case in the future, with renewables squeezing out fossil fuel generation, and gas once again becoming competitive with coal.

Germany’s glut of renewable electricity generation leads to what The Economist describes as “a web of grotesque distortions” in demand and supply, which leaves the existing grid infrastructure struggling with the fluctuations it creates.

The country also needs to connect the new northern windfarms to demand in the south. At the moment, Germany has to route power through bordering countries’ grids when supply is high – taking wind power from the North Sea and Baltic regions to Germany’s south. But Germany’s neighbours don’t see this as a sustainable solution. The Czech Republic has threatened to block Germany’s electricity overflow – so Germany will need to upgrade its own grid infrastructure.

The German energy agency estimates an additional 36,000 kilometers of high voltage lines are needed by 2020. That’s about 20 per cent of the length of the existing transmission grid, according to the Oxford Energy Institute. The grid’s technology also has to be upgraded to deal with households both consuming electricity and generating it through solar panels on their roofs.

But the public aren’t so keen on having more pylons dotting the landscape. There is a vocal not-in-my-backyard lobby against grid expansion, with an environment agency poll showing only 42 per cent of Germans would accept a new power line running through their community.

So the Energiewende is as much about getting the public to accept the need for grid upgrades as incentivising renewable energy generation.

The Energiewende’s policies aim to incentivise renewable energy development, continuing a policy tradition that goes back over twenty years. But the government will also have to ensure the energy infrastructure can cope with increased renewable generation.

And cracks are forming: Germany’s first anti-wind energy group has been established to combat plans to site windfarms in its fairytale forests, and the economics minister is fighting against cabinet colleagues over suggestions the transmission grid should be nationalised. With elections due in September, the Energiewende’s supporters hope those cracks don’t prove divisive.

One Reply to “The Energiewende: Renewable Energy In Germany”